The Blade Itself by Joe Abercrombie 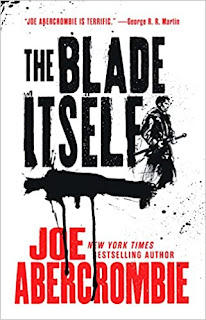 The Blade Itself, released by Joe Abercrombie in 2006, is the massive introduction to his First Law Trilogy, now an ongoing series. It is excellent, well constructed and well written, but for very specific tastes.
To say it is from the Grimdark subgenre is an oversimplification. It certainly is, but it's from the lighter end of this notoriously heavy subgenre, and agile enough to play with expectations.  This is a very character-driven book, taking the now-popular convention of having multiple point-of-view characters following their own plots, with their own backstory, and their own inner lives. This is not a book of heroes and villains, but rather of greys and blacks. You'll spend time in the minds of good people doing bad things, and bad people doing good things. For example, the author does a masterful job of creating sympathy for a professional torturer, contempt for a strong-jawed swordsman, and hope for a reluctant berserker.

The world is wholly invented high fantasy, a curious mix of early colonialism tropes, savage Northmen tropes, and high wizard tropes, but delivered with a modern insight and a fair amount of humor.  The central story that develops as the plotlines merge is about the reappearance of magic in a world that sees sorcery as a relic of bygone eras (if not imaginary), complete with a Merlin-analogue returning. The technology is up to the level of naval armadas and saber duels, but just shy of gunpowder. The author is dealing with repugnant elements - colonialism, torture, sexism - but is fairly adept at allowing for modern insights to peek through the text, and cutting the darkness with humor and trope subversions. The author comes closest to crossing the sensibilities of the reader with the use of "savage other" tropes that echo colonialist attitudes toward the middle-east, but they are delivered by unsympathetic in-text colonialists in a way that allows the reader a wider perspective. You should know going in that torture is a recurring element of this book, but the author leaves the graphic details to the reader's imagination.

All of this is not to say this is not a dark book. It is made of ugly politics and callous manipulators and false friends, in a world where the sheen of high culture hides humanity's ugly nature. I have not read the second book yet, but the first left me eager for more. For those who like Grimdark, this is one of the best examples I have read, rivaling G.R.R. Martin's A Song of Ice and Fire series (aka Game of Thrones) in scope and similar in tone and approach. This would be a fine recommendation for what to read next after catching up on Martin's grand opus. The Blade Itself is a brilliant introduction to a promising series, an excellent choice for any fantasy fan, and a must-read for Grimdark fans.

Are you a fan of video games, or young adult fiction?  Then you need to check out Slay, Brittney Morris's debut novel. In real life Kier...