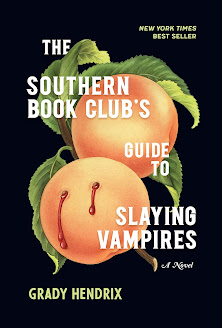 No sooner had housewife Patricia Campbell silently wished for something exciting to happen in her small town did the mysterious James Harris show up on her block. Patricia has a bad feeling about Mr. Harris, but is her intuition obscured by the massive amounts of true crime books her book club is reading?

I was disappointed, but not unhappy, with Grady Hendrix’s The Southern Book Club’s Guide to Slaying Vampires (referred to from here on out as TSBCGTSV). I place the blame an earlier Hendrix book, We Soul Our Souls.

We Sold Our Souls is a satanic, brutal, raw, and METAL story. Kris is a former rockstar guitarist, scraping herself through “normal” life after fame. Kris must get the band back together after a dark revelation occurs, to say the least. There are no Stepford Wives for miles in We Sold Our Souls, and edgy humor is abundant. If adapted to film, and adapted well, there is no way We Sold Our Souls would merit a rating less than “R.”

I had recently finished We Sold Our Souls when news broke of a forthcoming Hendrix title. Publisher Penguin Random House markets TSBCGTSV as, “…Steel Magnolias meets Dracula.” I would describe it as one of those horror movies that squeaked by with a PG-13 rating just shy of an R-rating. If you enjoy Stranger Things, you will appreciate the well-developed 90’s aesthetic of TSBCGTSV.

While I did not enjoy TSBCGTSV as much as I thought I would, let it be known that I will and do read everything Grady Hendrix writes. I recommend The Southern Book Club’s Guide to Slaying Vampires as a multi-faceted, intermediate-level horror read.

To Drink Coffee With a Ghost by Amanda Lovelace

Lovelace unravels the memory of a toxic relationship between mother and daughter, body shaming, and the haunting shadows of the dead walking...